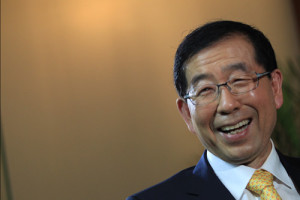 Hello and welcome. I deeply appreciate all the citizens, authorities of community organisations and foreign operators from overseas. The Seoul Metropolitan Government has been putting great efforts to revive Seoul as the city of life and enrich the lives of citizens through urban agriculture with our citizens.

Citizens practise urban agriculture in various ways, from their own farm to their roof gardens or balconies, and communicate and share with each other through urban agriculture. In addition to producing safe food, urban agriculture is the activity where learning, work and play happen at once, and is bringing liveliness to the dreary city in the midst of arising community spirit.

At this year’s Seoul Urban Agriculture Expo 2016 International Conference, speakers from 10 different countries, including Korea, Japan, China/Hong Kong, USA, German, France, Australia, Taiwan, Singapore and Italy, will be joining together for the theme of ‘Urban Agriculture and Coexistence’.

I would like to express my gratitude for all urban farmers and organisations of Seoul that worked very hard for the International Conference, and the city of Seoul will work harder to create Seoul into the city of community, the city of life where citizens cultivate kitchen gardens and grow happiness together. Thank you.