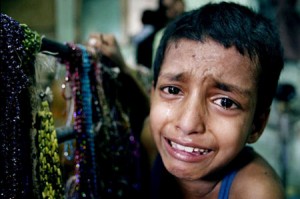 Unbelievable isn’t it? In today’s hi-tech world, kids around the world are still being used illegally to make a buck. And much of this in poor countries that became and remain poor because of developed countries still demanding repayments for loans. Many of these lender countries are also the same countries that originally invaded and ravaged the today poor countries’ natural and human resources, leaving their lands, people and culture often destroyed.

There are currently 115 million children worldwide trapped in appalling forms of child labour, including war and armed conflict, slavery, debt bondage, sexual exploitation and work that harm their health, safety and development. By far, the largest number of trafficked children are in the Asian-Pacific region – our region.

Human trafficking is driven by the demand for cheap goods, services and labour. We consumers are often very unaware that trafficked and exploited children have been used in the labour to produce goods we buy. As individuals, governments and businesses worldwide directly and indirectly cause human trafficking and slavery – the worst kinds of child labour – they all have a role to play in stopping it.