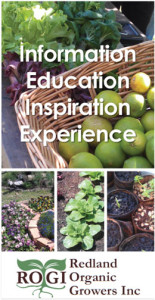 The explosive interest in gardening in recent years, especially edible organic gardening pursuits like permaculture and urban farming, is certainly very heartening to witness ... and in my case, be an exciting part of professionally.

One of the wonderful results of this gardening renaissance is the abundance of new and old gardening groups growing across Australia, including online. For Brisbane gardening enthusiasts alike, whether edible, ornamental or a little of both, we are spoiled for choice on and off line, especially with groups like Redland Organic Growers Inc (ROGI for short), which focuses its membership and activities in and around the Redlands region of Brisbane.

With a very solid, loyal and active member base, monthly meetings, garden visits and makeovers, fundraisers, regular education and generous sharing of produce, knowledge and information in the community, ROGI is a gem among Brisbane's garden groups.

I had the pleasure of being invited to guest speak at their September monthly meeting on Wednesday 14 September at Alexandra Hills, Brisbane. I spoke on some of my business and community activities, including my urban farming and permaculture education and consulting, workshops and events, Crop Swaps, The KFC Project and more. It was a solid turnout and a very warm and welcoming audience. I really enjoyed the gathering and have decided to become a member. They are also on Facebook at ROGI.

In yesterday’s blog post I shared the story of the KFC (Kindness for Chickens) Project we launched in June 2012. The project rescues battery hens from caged egg farms around SE Qld and re-homes them with caring families.

When we were designing the project we discussed rules and best practises, what we would and wouldn’t do, and how everyone involved in the project should ideally behave and handle the hens. One of the flexible rules we personally had was ‘no more chickens’ for ourselves, as we already had over the limit. But, you know, chooks will be chooks and rules are meant to be broken. And anyway, chickens are like potato chips – you can never have just one. 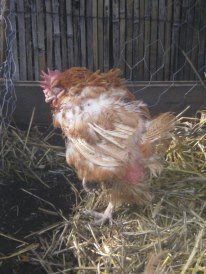 In the very first group of five hens rescued officially under the project was one very sick little hen. All five hens were in poor condition – mostly naked, minor skin infections and inflammations, lifeless dead tail and wing feathers, toes and toenails bent, broken or missing, beaks cut back or off, and generally in rough condition – but this girl was worse. To be honest, most hens who came in like her, and most I’ve ever handled like this, died within 24 hours. She was the most naked of the five hens. She was the most infected and inflamed. She was quivering and shivering. She could barely keep her eyes open and she was not interested in her new surrounds like the other hens. She just stood on one leg in the corner of the run, in a little patch of sunlight, shaking and dozing (please see photo left). I strongly suspected she would not live through the night.

As it was early winter, we already had three young silky chickens upstairs in cages at night, with a heater on. We placed this sick hen in a cage with fresh water and food next to the silkies and the heater for a few nights, hoping she’d survive and get stronger. The next morning she was OK and looking better. We put her outside to wander around the backyard during the day. She enjoyed dust bathing in the sun, gently scratching about and seem to follow the silkies everywhere. Over a week she recovered pretty well and a few weeks later it was evident she would survive. Although recovering slowly and looking better each day, she still seemed a bit mentally unstable – as if each day reset her brain. She would revisit things will renewed interest each day, as if everything was new to her. She seemed a bit slower mentally than the other hens and approached everything with much curiosity and caution. But she was alive.

There is something indescribable and incredibly satisfying watching newly rescued chickens doing what chickens should do naturally – slowly and tentatively checking out their new surrounds, exploring their new freedom, starting to scratch the ground, peck at seeds and weeds and dirt, stretch their wings and legs and necks, eat fresh grain and dust bathe in the sun. But I digress. 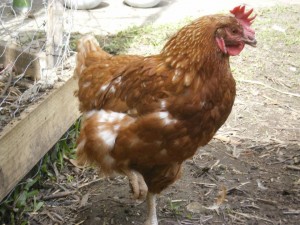 She became quite cuddly and followed Min everywhere around the backyard. They formed a special bond and Min named her ‘Mu’ (Miss Unsure) because she was so curious and unsure about everything. Mu formed a bond with the silkies also, who also grew into fun young chickens, exploring the gardens with Mu always a few slower steps behind. After about 10 weeks, she was almost fully feathered again and looking amazing (see photo left). Visitors couldn’t believe she was the same chicken. She then started to show interest in being around the other ISA Browns, so we transitioned her over a week to live permanently with our main flock. To this day, she remains a quiet, gentle, aloof hen, happy to remain in the periphery of the other ISAs and do her own thing. She’s one of the most laid back chooks I’ve ever seen. 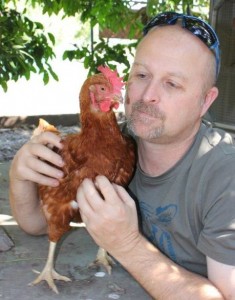 Pictured here (left) with Green Dean, Mu is fully feathered, independent, strong and healthy, and living testament to never give up on any living thing.

For more info on the project, please visit the KFC Project webpage: