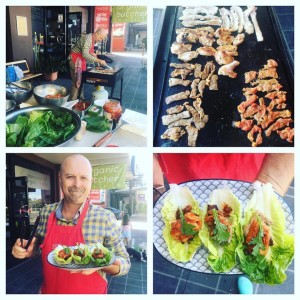 I had the pleasure and a lot of fun presenting a Korean BBQ cooking demo at Sherwood Road Organic Meats in Brisbane on Saturday 17 September.

I showcased their amazing organic porky belly (a classic in Korean BBQ), beef and chicken.

It's easy to see why this business - both Sherwood Road and Morley Street Organic Meats - is thriving and so popular, with loyal regular customers supporting the grass-fed, ethically raised and certified organic meat movement. Their variety is also amazing, including a range of gluten-free products.

With the growing popularity of Korean food, it was great to have so many people enjoy the samples we provided on the morning ... and also watch the faces of newcomers to Korean cuisine light up on discovering this zesty fresh spicy food. The collaboration of Sherwood Road Organic Meats' produce and our Korean BBQ style was a hit !

We are available for cooking demos and we run regular Korean cooking and Korean kimchi classes for those interested in exploring this amazing healthy and popular food. Contact us to find out more and check our events calendar for upcoming classes. 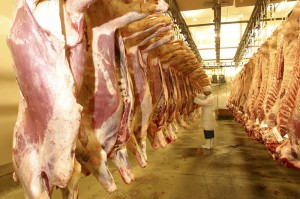 We all know that eating less meat is better for our health. Even the most ardent hardcore meat-eaters, in all honesty, know it’s better to consume less meat for our health and wellbeing. Overwhelming scientific evidence now links meat-eating with numerous serious diseases, especially cancer, as well as a host of smaller daily health complaints. Diet-related diseases in countries, cultures and spiritual systems that don’t eat meat, or eat a limited amount of meat, are markedly less, and even sometimes non-existent. But the benefits of eating less or no meat is not only healthy for us – it’s better for the planet, and will greatly help to reduce emissions and restore Earth health.

A US study found that men and women eating 10g or less of red meat per 1,000 calories of food intake had a:

But the chicken industry is fighting back. 90% of Aussies eat chicken at least once a week, and 60% of us eat chicken at two times or more each week. More than half of Aussie chook eaters rate chicken as the best value and healthiest meat meal option.

The Australian Chicken Meat Federation claims almost all chicken meat sold in Australia is locally-produced (except for some small amounts in imported canned and frozen products), no growth hormones or steroids are used in Aussie chicken farming and our chooks are not caged – a reason why chicken may also be Australia’s meat of choice.

While Australia needs to be more humane in all areas of animal farming for food production, the reality is that the cost – economically and envirnonmentally – of producing red meat compared to chicken is atronomical. Beef production in particular in Australia, from earliest times, has contributed to Australia’s topsoil degredation and to massive greenhouse gas emissions through methane. A trip to any cattle grainfed feedlot or slaughterhouse would turn even the most hardcore meat lovers off meat for life.

Part of ethical eating and Earthcare is knowing where your food comes from, how it’s produced and who was harmed in the process.

Even a small step towards less meat, for health and the planet, is a great help. For example, at home during the week, we try to maintain a vegetarian diet. Then on weekends, we plan, shop, cook and enjoy something special all together, which is usually meat-based, especially organic, free-range or ethically farmed if possible. Literally, every mouthful makes a difference.