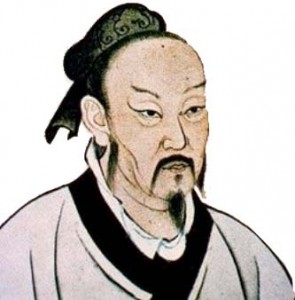 Chuang Tzu, often described as the ‘do nothing Taoist’, may have been on to something when he seemingly lazed about and lived at his own pace, despite the criticisms of his philosophical colleagues.

Taoism is an ancient spiritual system originating in China. The founder is believed to be Lao Tzu, born around 400 BC, keeper of the archives in the imperial palace of the time. Seeing society decay around him, he chose a solitary reclusive life deep in the mountains. On his departure, he was asked to share his wisdom and experience in writing. He wrote down a collection of 81 short verses, almost poetry, called the Tao Te Ching, that formed the basis of this now worldwide respected path.

So what does Taoism and ‘doing nothing’ have to do with gardening? Well, my garden to be precise. Last year, like any good gardener, passionate about their plot, I tended, fussed, prodded, poked, plucked, dug, watered, fed and watched my garden daily, observing all the things that happen, and don’t happen in gardens, with all the hopes and aspirations of any keen gardener. And of course, I got great results. But I wonder, was all the fuss worth it? Could I have achieved the same results – a thriving, abundant, almost jungle-like space – with a little more ‘doing nothing’? Let’s see.

As a permaculture educator and consultant, of course I design my gardens on those principles, especially with a view to maximum production for little effort. I can report, that since December, a combination of summer heat, travelling, guests over the new year, lots of rain and lack of motivation at times, my garden is doing better than ever, even thriving with absolutely no input from me. I have watered a few potted herbs during hot periods, but the rest has been ‘respectfully, even artfully, neglected’. Yet food production has increased. Soil fertility has increased. New food plants, from self-seeding, are growing everywhere. Old friends are thriving and bigger than expected. Seedlings, once forgotten, are now mature, productive plants. THIS IS PERMACULTURE!

This is biomimicry. This is how nature works and works well it does. There is some work at the beginning, some design and set up. Then a little guidance and maintenance to keep things moving until a certain natural process takes over, and voila!, your garden is no longer a bed with rows of planned edibles. It is an ecosystem, with thriving biodiversity and life beyond anything you could have imagined, and most of it unseen. THIS IS PERMACULTURE. This is Taoist ‘do nothing gardening’- yet pregnant with possibilities, potential and abundant produce – something Chuang Tzu would definitely approve of. 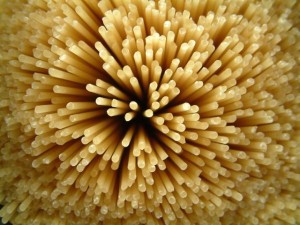 Nothing says Italy like its food, and nothing says Italian food like pasta. Wherever Italians have immigrated they have brought their pasta, and so today it is basically an international staple. Unlike other ubiquitous Italian foods like Pizza and tomato sauce, which have a fairly recent history, pasta may indeed have a much older pedigree going back hundreds if not thousands of years. To begin to unravel the long and often complex world of pasta we have to look at its origins and some of the myths surrounding this now worldwide food.

Many schoolchildren were taught that the Venetian merchant Marco Polo brought back pasta from his journeys in China. Another version states that Marco Polo’s discovery was actually a rediscovery of a foodstuff that was once popular in Italy in Etruscan and Roman times. Well Marco Polo might have done amazing things on his journey, but bringing pasta to Italy was not one of them – it was already there in Polo's time. There is some evidence of an Etrusco-Roman noodle made from the same durum wheat as modern pasta called lagane (origin of the modern word for lasagna). However, this food, first mentioned in the 1st century AD was not boiled like pasta; it was cooked in an oven. Therefore, ancient lagane had some similarities, but cannot be considered pasta. The next culinary leap in the history of pasta would take place a few centuries later.