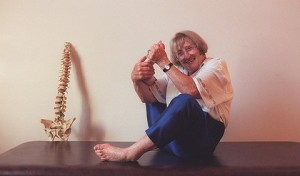 The first thing you noticed about Beryl Kennedy was her remarkable posture: upright back, but not stiff. She moved with grace, freedom and rare fluidity, while most of us plod on with tight chests, jaws and necks, and sore backs and joints.

This guru of physiotherapy was 92 years old when she died, but had rolled back the years in a way that few achieve. Experts agree that she moved like someone half her age. It is hard to believe that Beryl knew back pain like a long and intimate acquaintance: an unstable lumbar joint caused such severe problems that she was forced to wear a surgical corset for 10 years, a steel brace for 18 months and plaster for two months.

That was over 50 years ago and most other people with a similar back problem would have long since been in a wheelchair. Beryl knew she could defeat it, but conventional physiotherapy failed. She discovered new ways of overcoming it, partly with a method of bracing her side abdominal muscles, which we rarely use. In later years she was so stable and mobile she could touch her forehead with her toes.

She said, “One woman came to me at the end of one of my back classes and said, ‘You are a very loose woman, you know.’ I found this hilarious, but also high praise, because I am all about helping rediscover freedom of movement. A lot of people are stiff as boards. They have a lot of muscle tension in them and stress makes it worse, because tension makes muscles contract. As we get older, most people slow down and do less and move less, which makes us age a lot faster than we need to.”

After almost 60 years in physiotherapy, Beryl is too busy taking back-care classes, post-graduate courses for physiotherapy and writing to think of retiring. She said, “I have too much to do. Besides, retiring tends to be a health hazard, because people slow down and restrict their movements even more. And I don’t like segregating older people in homes, where everyone else moves slowly. I believe in all generations mixing.”

Musculoskeletal problems affect more people than any other injury. Over 50,000 people suffer serious back injuries at work each year in Australia, and around 80% of Australians will have back problems in their life. Tension and stress are an increasing part of modern life, as are the growing numbers of retired people. Throw in poor posture, cold hands and feet, and you have a checklist of some of the most common health problems. Most back and other musculoskeletal problems stem from our conditioning from childhood, to use a restricted range of movements.

“We get into a sort of straightjacket of limited movements, often very young, and the straightjacket gets tighter as we get older, slow down and restrict our movements even more”, said Beryl. Childhood conditioning for girls to sit with their legs together, ‘so people can’t look up their dress’, results in many women continuing to sit like that when they grow up, though it is far more preferable, comfortable and healthier to sit with legs apart.

When we bend, which is one of the most straining movements, we consciously do not put our bottom in the air, because we think it is rude, even though doing so helps minimise strain. Therapists too often treat only the painful part, with often limited exercises, but don’t address the body’s dysfunction. Pain in the lower back, for example, is often linked to compensatory tightening of muscles in the upper back, chest and neck.”

Beryl’s methods drew on the Feldenkrais School of body care, which has swept through physiotherapy and movement-education circles in the past 30 years. In the 1950s an atomic physicist names Moshe Feldenkrais rejected the traditional, mechanistic view of the body, with its body-mind separation, and showed people how to explore the process of movement through their senses and to reorganise their movements in a far more subtle way.

The mechanistic view is exemplified by the ‘stretch and strengthen’ exercises that people do to improve their body functions. Feldenkrais argued that such repetitive, habitual movements kept people trapped in inefficient patterns of moving. His method used very slow, gentle movements to help break down these habitual patterns of movement and enable a person to sense and feel the process of moving and to reorganise it.

Beryl said, “We habitually work on automatic in our actions and reactions. We don’t engage the senses at all, so we don’t feel how and what we are doing. Moreover, repetitive exercise routines keep overworking some muscles and joints and under-using others in the same old patterns. There is no quick-fix. We have to learn by working constantly at it to break down our habitual ways of moving, and we deep-down resist changing conditioned responses.”

Unlike Feldenkrais practitioners, who give no specific procedures to get rid of or prevent pain, Beryl had strategies and procedures for people to use to get rid of their pain. She recommended people ‘flink’ – feel and think – what they are doing. The Feldenkrais method is popular in dance, acing and other movement-education circles, especially in the US, where health insurers are monitoring the outcomes because of the huge payouts they make for conventional care that achieves few results. They questions why people with whiplash injuries keep going to therapists for years and get no better, while with one or two lessons from Feldenkrais teachers they improve dramatically.

People don’t realise how much they are affected by muscle tightness. There is often cold hands and feet associated with back pain also. This is a sign that muscle tightness is constricting blood flow. Beryl did a ‘workout’ of gentle movements in bed in the morning and at night, which she said were essential to getting rid of any stiffness, aches and pains. The gentle, exploratory movements helped her to soften all muscles and meant she never had problems with sleeping. She was passionate about helping people learn how to liberate themselves from the straightjacket of muscle tightness.

For more than 30 years, Beryl had been teaching the ‘dynamic abdominal breathing method’, which she said was vital in stabilising and supporting the spine. She could balloon out either or both muscles and invited you to feel the support it gave her. (You can feel these muscles if you put your hands just above your hips and cough.) Beryl said, “Many people are not helped by her methods, because she insists they take responsibility for looking after themselves, and many don’t want to do this. They want to be the passive recipients of treatment. But those who do take responsibility can get great benefit. They are empowered, regain confidence and rid themselves of the depression that accompanies chronic pain.”

Beryl said, “People need to ‘keep all parts of their body in good working order’ with regular daily movements, where you keep exploring your body and know what your needs are and how to cope with them.”

Beryl Kennedy was Australia’s longest-practicing physiotherapist. At 90 years old she defied most notions of aging, and offered a method of staying agile forever. Mind over matter – by changing the way she moved, Beryl was able to overcome debilitating back pain.

Beryl Kennedy died peacefully in her home, surrounded by her loving family, on Saturday 29th of August 2009, at the age of 92. Beryl had lived life to the fullest!